Look out! Some asteroids struck Two Mile, BC.

Specifically, our field. And not so much asteroids as an excavator. We have taken some leaps this year towards our goal of a permaculture food forest and perennial plant nursery, thanks to a generous donation from The Cassandra Trust. What we are designing and building here on our property, we hope to be able to teach, inspire, and supply the means to do elsewhere. 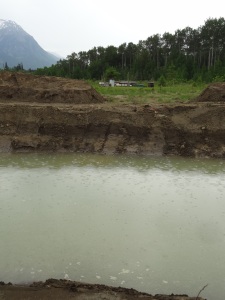 Since we live without ties to the grid or water lines, and we chose to build our home in a sandy field relatively far from the river, ponds was our chosen method of water catchment and storage. We have one pond that was dug in 2015 and has been supplying our water needs since, supplemented by the tank that catches rain from the roof of the earthship.

Last year we upgraded with a solar powered pump that pumps water from the pond to a tank on the hill supplying gravity fed water for the garden.

Now this year we dug a pond next to the tank, to supply water for the hugelbeds we planted in the fall. The hugelkultur is on contour around the hill and will be flood irrigated via a swale above it. So far even without the swale, the trees and shrubs we’ve planted below the hugelkultur seem to be doing well (those that survived the winter anyway), as well as the annual crops we planted on top. 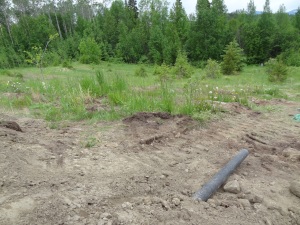 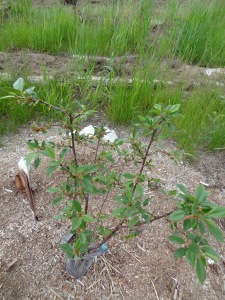 The pond, being on top of a hill, won’t hold water right away, but the excavator operator, Taylor, smeared the sub-soil with a heavier clay content up on the sides to facilitate sealing. The next step for us is to get pigs and have them live in the pond until fall. Pigs are great pond sealers, they stomp and compact the ground, and love to wallow in the muck. The idea is to keep running water into the bottom of the pond, which alone helps bring the finer clay particles to the surface, and start a small pond that will expand as the pigs seal it. So far we have the electric fence charger and poles in the ground, now we just need a pig shelter and some pigs.

Next came a lower pond, or crater garden, between the chickens and the bees. This was a naturally low lying area that held water in the early spring. Water slowly trickled in as it was being dug, and now it is about half-full. The peninsula in the middle was our compromise for a duck island, since we would like to have ducks live there in the future. We will watch and observe it over the year as we build up the soil around it for future gardens. 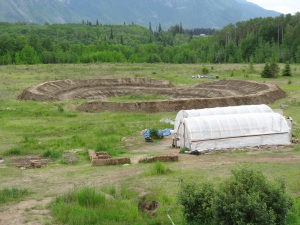 And last but not least, a shallow well. We stuck a ten foot culvert, drilled with holes in the bottom 6 feet, in a hole by the pond and piled gravel around it. It was a battle to get the pipe in and the gravel around before the silt caved in, but we did a fair job and so far its holding water three feet from the top. We will pump it out until the water runs clear, and hopefully it will be a source of future drinking water and winter irrigation. 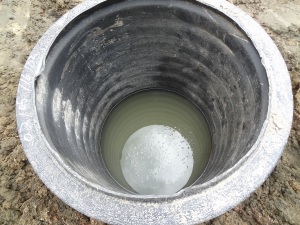 And of course, the garlic is coming up and doing well, despite being in a spot that is possibly too wet. An odd problem for us, this spring we had flooding in the fields by the pond. It was too wet to plant potatoes for weeks and we had to dig some ditches to drain the water away. 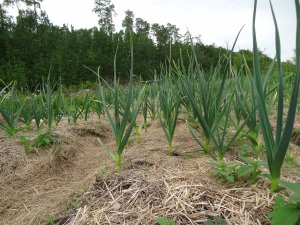 One thought on “Ponds Galore”